A consummate musician. . . an unusually versatile and accomplished violinist. . . and a creative, supportive teacher who is equally at home in the world of classical . . . jazz . . . or blues music.

As a teacher Doug draws on a wealth of resources and a lifetime studying and performing in diverse musical contexts. 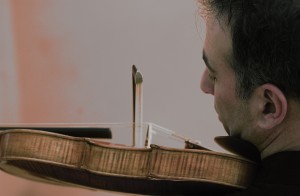 Doug Jasik has performed with Tony Bennett, Diana Ross, Peter Nero and the Philly Pops, the Filarmonica de Caracas (Venezuela), Pennsylvania Pro Musica, Orchestra 2001, the Viennese Orchestra of America and the AVA Opera Company. He was a co-founder of the early music consort, “Spectra Musica.”
As a jazz violinist and composer, his repertoire encompasses Blues, Latin, Middle Eastern music, Funk and R & B.  He has performed extensively with his own ensembles, as well as with Foto Rodriguez y Charanga La Unica, and he has recorded for Tommy Bell at Philly International Records.
As a composer and improviser he has explored a range of musical cultures outside of European classical.  His performances usually showcase a wide range of “voices” that the violin is capable of generating, from Brazil to the Middle East… to Blues… to Bach.

He began playing blues and rock while finishing high school over in Israel and he has since studied jazz, composition and improvisation with Vic Juris and Dennis Sandole.
Doug has lived in Venezuela and Israel, traveled extensively, and speaks some Spanish and Hebrew (and he once was a decent tennis player…a long time ago).